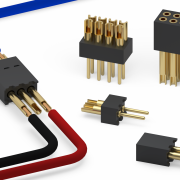 Our high quality,  .050” (1,27 mm) pitch solder cup interconnects  are the choice for terminating cables and wires used in critical applications such as medical and industrial equipment.  The headers and sockets each feature closed cavity pins and receptacles providing isolation between the soldering and interconnect areas; keeping solder from contaminating the pin and socket connection.  The solder cups are uniformly aligned to facilitate efficient soldering, especially useful for terminating cables, and can accept up to 26 AWG stranded wire. 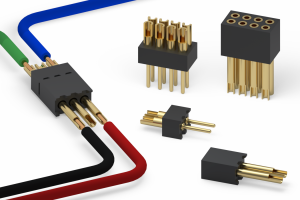 The male headers have .016” (0,41 mm) diameter tails suitable for mating with all Mill-Max .050” (1,27 mm) pitch   SMT and through hole board mount sockets, perfect for making wire to board connections.  The socket receptacles are a two-piece construction with a precision-machinedouter shell and stamped beryllium copper internal contact designed for repeated mating while maintaining reliable contact over the life of the product. The insulator material is high performance Nylon 46 with excellent chemical resistance, mechanical strength and an HDT of 290° C to withstand most soldering processes.  The standard plating option is gold, providing interconnect reliability, corrosion protection and wear resistance.

Connectors are available in single and double row configurations:

For more information use the links to the right for additional product details, to order a sample, to find related products, or contact  Mill-Max Technical Services  for custom design options. 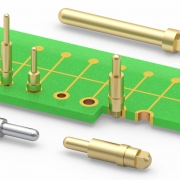 Oyster Bay, NY, June 13, 2017 – Mill-Max is adding to its diverse mix of swage mount PCB pins with six new offerings designed for interconnect applications.  These swage mount terminals are designed to be mechanically fastened to a board or panel and plugged into sockets or soldered into mating boards in board stacking and other interconnect configurations.

Swage pins are often thought of as wire-to-board soldering terminals and test points or as hardware such as PCB standoffs, but they are also an excellent choice for board-to-board interconnects.  They are cost effective due to their simple design, don’t require the more precise PCB hole specifications associated with most press-fit pins and can be processed in volume with semi-automatic or automatic equipment.  Swage assembly is a method of mechanically fastening pin terminals to a circuit board, similar in style to riveting.  After the pins are swaged, they are soldered, providing a robust mechanical and reliable electrical connection. 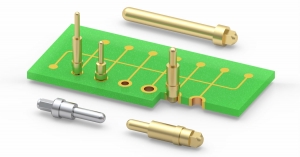 The swage pins featured here are offered in various diameters and lengths to suit a wide variety of interconnect applications.  They are useful when space is limited, near the edge of a board for example, where a connector with its housing is not an option.   The swaged pin takes up relatively little space and is secure without the need of an insulator.  The longer pins are perfect for overcoming the height of taller board components (large capacitors, transformers, power supplies, potentiometers) to connect to a daughter card or other module, while the low profile 4658-0 may be used on boards which are primarily SMT, to keep the overall stacked board assembly height to a minimum .

All the pins are high speed precision turned from brass alloys and annealed to prevent cracking during the swaging operation.  The standard plating for these pins is matte tin over nickel with other plating options available upon request. 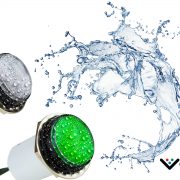 The ruggedized PML50 Series FlexVolt indicator can be used with voltages ranging from 5V to 28V DC circuits, which reduces inventory cost and opens up unlimited design opportunities.

The LED indicator is available in five single colors including red, green, white, blue and yellow. The PML50 Series is also offered in bi-color versions including red/green with a clear lens for increased contrast between on and off.

For more information on the PML50 Series and to view the product video go to: https://vcclite.com/new-pml50-series/

About VCC
Based in greater San Diego, California, Visual Communications Company, LLC, is the leader in illuminated components. VCC is the recognized leader in the development and manufacturing of innovative LED, incandescent, neon and specialty indicator light solutions and light pipes for global markets including aerospace, food service, people movers, transportation, medical, IoT and industrial. VCC provides custom and standard solutions with their design engineering expertise, superior customer service and broadest product line in the industry to exceed user experience. With 40+ years of experience, VCC and its distributors serve customers all over the world. VCC is changing the way of communication visually and indications needs. Learn more at www.vcclite.com. 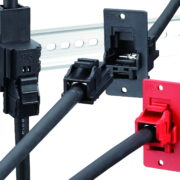 DOWNERS GROVE, ILLINOIS — March 27, 2017 — Hirose, a leader in the development of innovative connector solutions, has developed a single-pole 160 Amp in-line power connector that supports a wide range of power control and battery applications. The high-current EF1 Series power connector utilizes a crimp contact that offers a quick and secure one-step connection. The snap-in lock produces a secure, locking connection and eliminates the need for contact screws, ensuring a stable and consistent connection.

The EF1 Series has a highly reliable contact spring design with multiple contact points. This design feature lowers the contact resistance and increases the current flow.

The EF1 Series connector is available in DIN rail and panel mount versions. Assembly is simple, and standard commercial crimp terminals can be used with the applicable 38mm2 (AWG#2) conductor size cable. Four types of keying are available to prevent mis-mating when using multiple connectors.

The EF1 Series has a rated voltage of 1000V AC/DC, a contact resistance of 0.5 milliohms, and an operating temperature of -25 degree C to 105 degree C.

For additional information about the EF1 Series connector, visit:
https://www.hirose.com/product/en/products/EF1/ 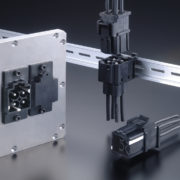 Designed for manufacturing power control boxes, generators, fuel batteries, and more, the EM35M Series power connector supports up to 50 Amps with an AWG #8 cable. The 4-position (three-phase power source + ground) connector offers flexible and customizable keying options that prevent mis-mating of multiple connectors. The EM25M Series power connector uses up to two keys on the plug and up to three keys on the receptacle for a total of ten keying combinations.

As a safety measure, the connector’s mating sequence design ensures the ground contact is connected first when mating, and last when unmating, to provide a proper ground before power is applied. In addition, the female contacts have a protective cover that reduces exposure and potential damage during cable assembly and delivery. Crimp termination via a standard JIS tool provides quick and easy installation and maintenance.

The EM35M Series connector is TÜV and UL certified. The power connector has a rated voltage of 500V AC or 500V DC, contact resistance of 1 milliohm maximum, insulation resistance of 5000 Megaohm minimum, and an operating temperature of -40 degrees C to +125 degrees C.

For additional information about the EM35M Series connectors, visit: https://www.hirose.com/product/en/products/EM35M/ 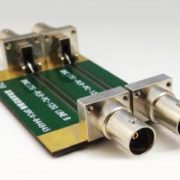 The BNC75 Series connector supports 3G, 6G and 12G transmission, and is available in thread-fastened and bulkhead versions. By supporting high-speed transmissions up to 12Gbps versus traditional SDI connectors, the BNC75 Series can reduce the number of 3Gbps or 6Gbps SDI connectors required in a design. This not only enables a drastic reduction in the size of a device, but also significantly decreases mating time and component costs.

The ROHS certified connector has an operating temperature of -40 degrees C to +85 degrees C.

For additional information about the BNC75 Series connectors, visit: www.hirose.com/product/en/products/BNC75/

With a height of only 0.65mm, the low-profile flexible printed circuit (FPC) connector facilitates smaller and thinner portable electronic designs…

DOWNERS GROVE, ILLINOIS — September 13, 2016 — Hirose, a leader in the design and manufacture of innovative connector solutions, has designed a miniature printed circuit (FPC) connector for portable electronics that require high-speed transmission. The FH53 Series FPC connector employs a back flip style actuator that minimizes the required mounting area, saving valuable PCB real estate. The compact FH53 Series FPC connector is on a 0.2mm pitch, a mounted depth of 3.2mm and a height of only 0.65mm. With a weight of only 0.034g, the FPC connector is well suited for wide range of consumer, medical, point-of-sale and wearable electronics applications.

“Compared to other back flip flexible printed circuit connectors currently on the market, the miniature, lightweight FH53 Series reduces the PCB mounting area by 46% with a 60% reduction in weight,” said Rick van Weezel, Vice President of Sales & Marketing at Hirose Electric USA. “The reduction in size and weight combined with ruggedness and high-data rates make this connector an ideal solution for a wide range of small, high-density devices.”

The FH53 connector has a top contact design that employs a contact retention spring, which ensures high reliability and signal continuity. The back flip style actuator and bottom contact design provides a high retention force of 9.9N. The contact design also prevents against solder wicking and flux penetration.

The FPC connectors have a user-friendly design, which includes wide tapers providing smooth FPC insertion. The FH53 Series also incorporates a metal lock mechanism, which allows for horizontal FPC insertion/withdrawal, and produces a clear tactile click that insures complete insertion. The FPC tab lock firmly holds the FPC in place until the actuator is locked.

The FH53 Series is currently available in 41-position (full production) and 51-position (samples) versions, with 21- and 31-position models available soon. The connector meets halogen-free requirements and is RoHS compliant. 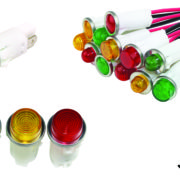 Featuring a bezel finish and polished stainless steel, the 1092 Series is compliant with RoHS and REACH requirements. The 0.500″ LED panel mount indicators are cULus listed.

The 1092 Series is currently in stock at Mouser. 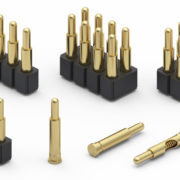 The 0919 spring pin has a recommended working travel range of .030” (0,762 mm) to .100” (2,54 mm) and a maximum mechanical travel of .118” (3 mm), the greatest in our current spring pin lineup.  There is a hard stop incorporated to prevent over compression and minimize the risk of damage to the spring.  This pin is ideal for applications where greater compliancy is desired.  It can compensate for problematic tolerance stack ups in assemblies featuring board-to-board or device-to-board connections.  The 0919 allows a greater range of movement between mating components, providing stable connectivity in assemblies subject to motion, such as mobile devices and light weight devices that often use more flexible housings and materials.  When compressed to mid-stroke, it still allows for .040” (1,02 mm) additional travel while remaining in the recommended working range.  Because the 0919 has more stroke capability, it provides higher forces at its recommended working travel than similar spring pins of this scale.  This may be desirable to a designer seeking to sustain reliable contact during cycles of high shock and vibration.  The 0919 exhibits an average 85 gram force at mid-stroke with the ability to achieve 127 grams at the top of the recommended travel.

For more information, please visit: www.mill-max.com/PR668 or view or data-sheet.